Skip to content
Home/Victorious at The 3rd Umami Culinary Challenge 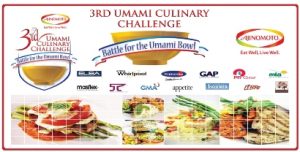 The foremost culinary competition for aspiring Filipino chefs dubbed as “the Ajinomoto 3rd Umami Culinary Challenge (3rd UCC): Battle for the Umami Bowl”, welcomed thousands of visitors at the SMX Convention Center last January 20, 2012. The annual event was a big success as it features over 300 student-competitors from universities, colleges and culinary schools in Metro Manila and nearby provinces. Giving credence to the affair are renowned culinary greats who graced the event as judges, speakers and cooking demonstrators.

Food journalist, television host, culinary researcher, and Filipino food promoter, Ms. Nancy Reyes-Lumen, served as the UCC Competition Director for three (3) years. She said “The Umami Culinary Challenge (UCC) continues to be the “first base” for HRA and culinary school students in the field of cooking competitions. The UCC gives them the confidence and added skills they need to be globally competitive. Thus, the trend continues for UCC to combine the elements of fun and competitiveness with education and knowledge in umami. Win or lose, the participants walk away with a big smile and a healthy mind. All in all, the UCC was, is and will always be a big “malinamnam success!” 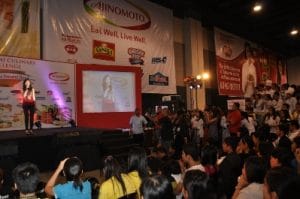 The highlight of the whole day event is the Awarding Ceremony hosted by Ms. Suzi Entrata-Abrera. Ajinomoto Executives opened the program with a special recognition to Philippine Culinary Icon, Ms. Nora Daza, for her significant contributions in the Food Industry. Mr. Taro Fujie, President of AJINOMOTO PHILIPPINES CORPORATION, gave his welcome remarks to congratulate all participants. Wild cheers and applause met Ms. Sarah Geronimo’s memorable performance as the Popstar delivers inspiration and motivation to all guests and participants. 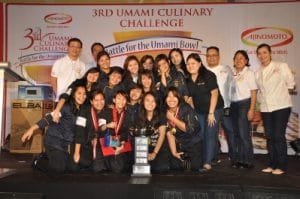