It’s not off, it’s fermented—microorganisms can preserve foods

All female mammals produce milk to nurture their young. Humans are unique in that some of us continue to consume milk as adults. Drinking milk, whether from a cow, goat, sheep, or buffalo, has many benefits. It’s rich in fat, protein, sugars, and micronutrients such as calcium and vitamin D. Plus it’s a source of clean water, and researchers believe it may even supply antibodies that fight infection.

Unfortunately, fresh milk spoils quickly and digesting its lactose content requires lactase, an enzyme normally produced only by infants. While certain groups, mainly in Europe, have evolved to produce lactase into adulthood, this trait is actually relatively rare. Fortunately, fermentation allows humans to consume milk safely, as fermented milk and yogurt have less lactose than fresh milk, and hard cheeses like cheddar and parmesan have little to none. 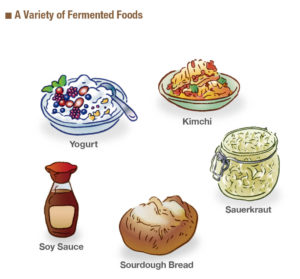 A variety of fermented foods 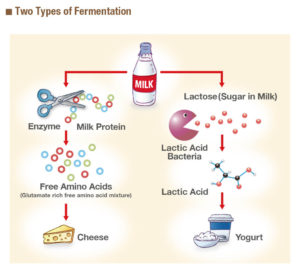 Fermentation has been used by humans for at least 10,000 years to make foods, including grains, legumes and vegetables, easier to digest and to preserve them. It’s used to make bread, sauerkraut, kimchi, natto, and soy sauce, to name just a few, and of course beer and wine. And all animals, including humans, have gut bacteria that break down food using fermentation into nutrients such as amino acids, the building blocks of proteins.

Fermentation also enhances the flavor of foods by increasing the concentration of amino acids, including glutamate, the key to our umami seasoning products. Until the 1960s, MSG was produced without fermentation using wheat protein extracted from gluten. The discovery of the bacteria that turns glucose into glutamate using Pac-Man fermentation made it possible to produce MSG on a large scale, anywhere in the world, from sugarcane, cassava, sugar beet or corn. Today, fermentation accounts for almost the entire 3.2 million tons of MSG produced annually. 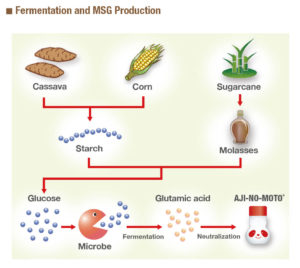 The Ajinomoto Group has more than 80 years of experience in fermentation, and this has yielded more than delicious foods. Our research has led to not just glutamic acid but almost all amino acids being derived through fermentation, including those used to manufacture biopharmaceuticals. Best of all, being completely natural, fermentation is environmentally friendly. Coproducts are returned to the soil as fertilizer, helping to grow more raw materials like cassava and corn, starting the virtuous cycle again.