Stirring the emotions with umami: the rise of a young Korean-American chef

There is a taste from home that Nick Lee will always remember – one that connects his past and his future. It is also a taste that helped him win a prestigious cooking competition.

Nick was born in Busan, a bustling seaport on South Korea’s southern coast. When he was nine, Nick’s family moved to the United States, where he went on to earn a bachelor’s degree in mechanical engineering and psychology at the University of Illinois. After graduation, Nick returned to South Korea and joined a hotel development company. Traveling around Asia working with hotel restaurants, he quickly discovered the fascinating world of hospitality. But it was not long before Nick began to dream of something bigger – he wanted to create gourmet cuisine of his own.

So Nick returned to the U.S. and enrolled in the International Culinary Center in New York City. At ICC, he came under the watchful eye of Chef Hervé Malivert, Director of Culinary Arts & Technology.

Then Nick heard that the first World Umami Forum, presented by the Ajinomoto Group, was scheduled to be held in New York City in September 2018. It would feature a cooking competition pitting six finalists from America’s top culinary schools against one another, with the challenge of creating the best umami-rich entrée. Determined to enter the competition, Nick wrote an essay describing his own signature recipe. Chef Hervé decided Nick was ready.

In the months leading up to the competition, Hervé trained Nick one-on-one. Nick refined his recipe and mastered its preparation based on a strict, two-hour timetable. He put a lot of thought into plating, too, as presentation is a key aspect of any culinary competition. The true art, however, was in the concept of what Nick set out to create.

Nick’s dish combined ingredients naturally rich in umami: kombu, Parmigiano Reggiano, tomatoes, and shiitake mushrooms. Like Nick himself, it reflected Western and Eastern influences. It’s difficult for Nick to single out one idea that made it all come together, but the heart of his recipe was something he remembered from his childhood in South Korea: the traditional abalone rice porridge that his grandmother used to make. With this in mind, Nick decided a risotto – made with Italian arborio rice – not unlike his grandmother’s porridge, could best elevate the flavors of the ingredients he had chosen. 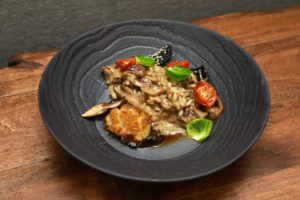 The winning entry in the 2018 World Umami Cooking Competition was Nick Lee’s Butter Poached Abalone, served with roasted mushroom risotto and oven-dried tomatoes. The victory earned Nick a trip to Japan to tour markets, restaurants and koji shops to understand how umami is used in different aspects of Japanese cuisine. More importantly, it gave him the courage to move forward on his chosen career path. Today, Nick continues to pursue his ambition of creating food that brings people from around the world together – just like his recipes. 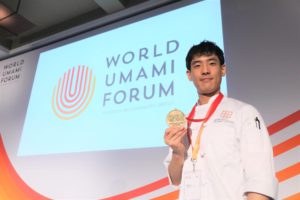 Chef Nick Lee, the winner of the cooking competition at World Umami Forum

For our part, the Ajinomoto Group continues to build rapport with culinary schools and culinary students like Nick Lee, so that tomorrow’s food industry leaders will be equipped to disseminate accurate information about umami and MSG.

Nick’s sojourn in Japan to learn more about umami